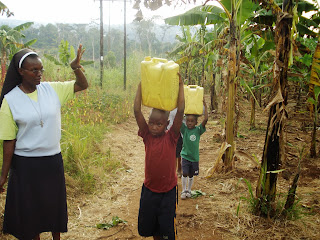 Sister Rosaria and children carrying jerrycans of water from the well. 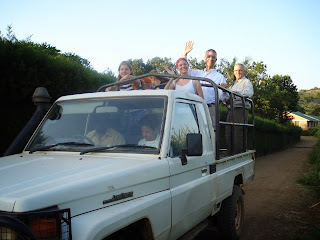 Heading out into the bush. 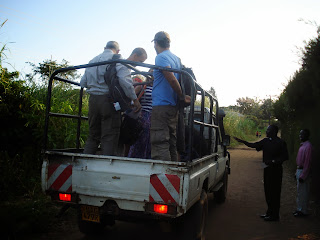 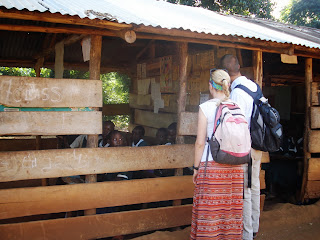 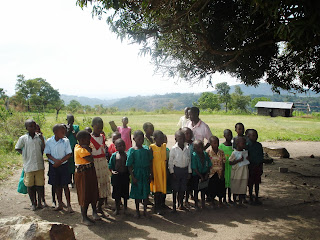 Email ThisBlogThis!Share to TwitterShare to FacebookShare to Pinterest
Labels: News

The last task on our biogas list was to get an accurate idea of the mass of animals wastes that were produced by the SND goats, rabbits, pigs, and chickens. This would be necessary to determine the loading rate for the digester, which in turn determines the digester size. Easier said than done, as it turns out! We got a measurement on the volume and density of the goat manure, and then attempted to coordinate a time to observe the rabbit and piggery cleaning. After checking with the farm manager three times, he finally said just to come back in the evening - he was having personnel problems. Then in the evening, we came back to find the rabbit area swept and manure dumped - no measurement possible. We also learned that the pig wastes aren't usually collected and composted at all; they are just flung up on a hill behind the sties. Time for a bit of educated guessing, something that engineers do more often than most people realize.

Our team continued to divide and conquer, with new plans and requests popping up throughout the day. It seemed like the reality of our departure tomorrow was sinking in with everyone, and only a small window was left to share time with us. Sister Juliette told us the pre-schoolers had been preparing a dancing and drumming performance, which turned out to be a priceless half hour that totally won our hearts and drained the batteries on our video devices. She then invited us to accompany her to a destitute villager's home so we could see the conditions that some families face here. Marc, Jackie, and Christina went with her and returned feeling disheartened by the unbelievable  impact of poverty and lack of education. Fortunately for the children, Sister Juliette has taken them under her wing by nursing them to health, clothing them, and finding them a place at the preschool.

Ed and Jackie made a presentation to a crowd of fourth through seventh graders about satellites, GPS, biogas, and the engineering profession. Many questions came up from the students and the staff about the upcoming biogas project.

Marc, armed with a flimsy hacksaw, headed towards the site of a failed HDPE water tank determined to cut samples to take home for testing. His background in materials and his connections with labs in Kentucky could help solve the mystery of what caused two tanks to burst in the same location. Erin and Jackie worked to complete the water source mapping and water quality analyses. Christina invested time in tending to the rehab of Sr. Anita's foot. John met one-on-one with Sr. Rita to give her a full summary of the week's findings and to discuss the project outlook for the next few months.

Father Godfry, the leader of the Buseesa Catholic Parish, had also requested some time to meet with our group today. John and Ed were the only ones available in the late afternoon, so we walked up the road with Sr. Rita to a compound that looked like a smaller version of the SND convent. The esteemed Father enjoyed a much greater quality of life than the surrounding villagers, and offered us a selection of sodas and freshly roasted g-nuts (peanuts) as he turned down the TV set and shooed a chicken from the open doorway. He took a genuine interest in our list of projects as John summarized the week's efforts and outcomes. The Father asked about biogas, suggested a location for a future drinking water project, and advised us on how to approach the local political scene. To our surprise, he also inquired if we intended to bring designs of more-efficient wood cookstoves to the village. This was one of our original goals until we received the feedback that these would be too expensive for most villagers. But since Father Godfry was interested in reducing his wood consumption and in setting a good example, we agreed to send him a prototype stove or to bring one with us on the next trip.

Dinner with the Sisters consisted of chicken and chips (potato fries), the equivalent of steak and baked potato to an American, with fresh papaya for dessert. The chicken was probably fresh from the farm, as a couple piles of feathers had been seen earlier. Our final engagement of the day was a traditional drumming and dancing performance in the dining hall. The kids were fantastic, and made any American school choir pale by comparison on energy, volume, fun, and enthusiasm. This was a farewell gift to us and many people repeated the request for us to return soon and continue our work. Erin, Jackie, and Christina handed out a Jolly Rancher to every child and teacher, and we turned in for the night.

The second Saturday of every month.
Next Meeting:
9:00 am Water Committee
10:00 General Meeting Begins